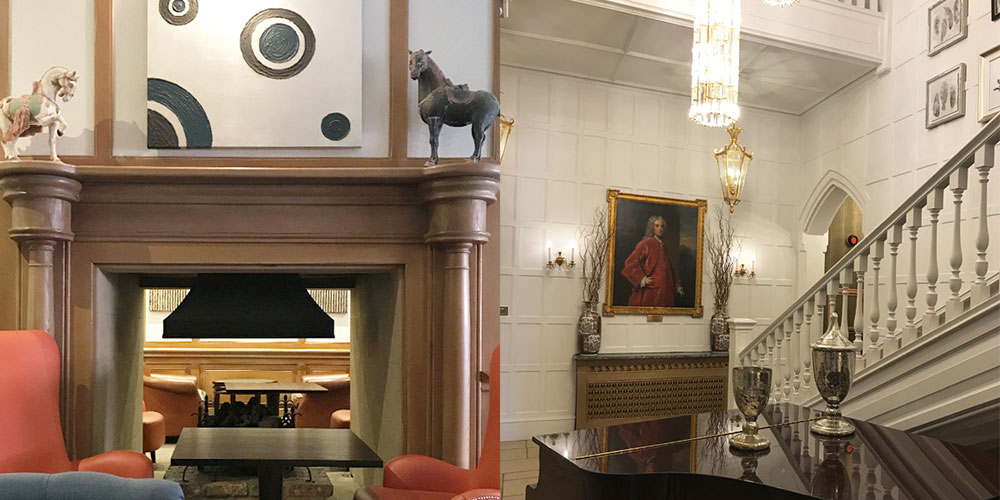 Whilst visiting a client in West Sussex, we happened across the Alexander House Hotel and Utopia Spa.

A spa day would have been nice, but for research purposes we were more interested in the public areas and wanted to see what a 5*star hotel in the affluent area of East Grinstead has to offer. 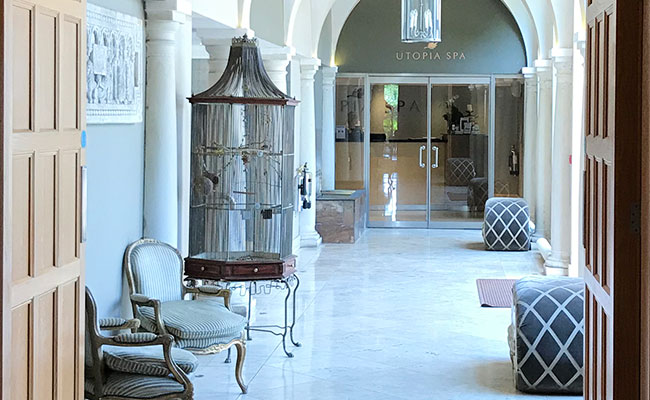 We arrived at a time when afternoon tea in the south drawing room had just begun, the reflections restaurant and lounge were full, and the AG’s restaurant had not yet opened for the evening. So due to unfortunate timing we could only head to the champagne bar, which meant we had to walk through the ground floor to get there and as it overlooked the garden terrace too we got a good idea of the hotel’s public areas from that walk. 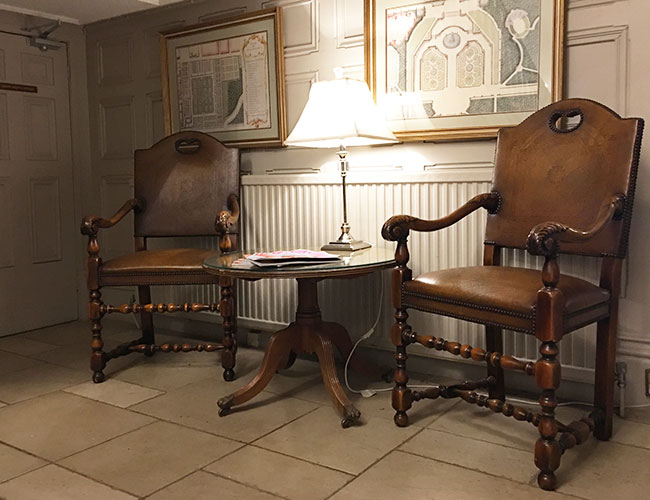 This posh spa hotel is set in a grand manor house amongst 120 acres of grounds and you can imagine the approach leading to the carved stone portico out front of the old building is impressive. 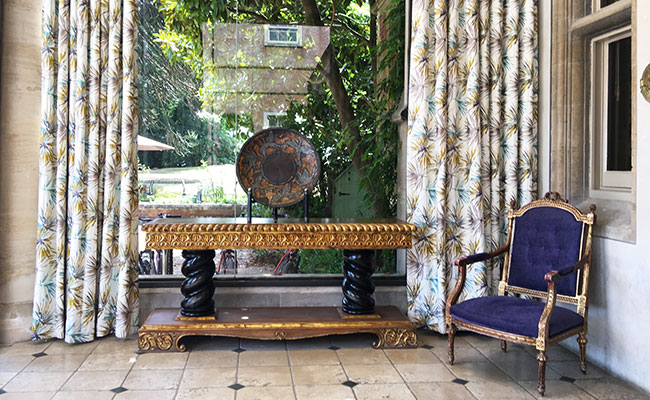 The manor house retains oak wainscot panelling, intricate ceiling features and fireplaces inside.  The newer building extensions with new carpet flooring and even the painting of the original wood panelling aren’t as harmonious combinations as they could be. 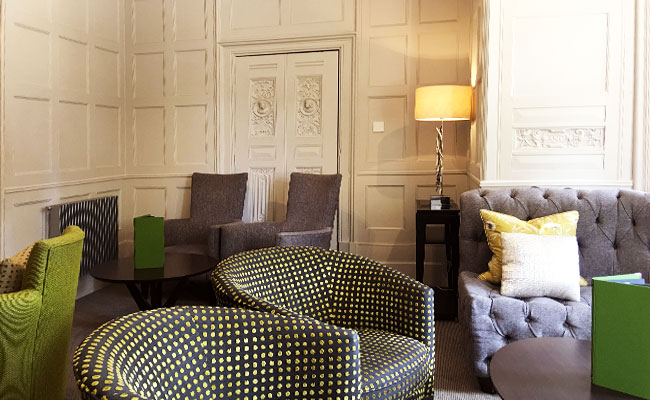 The original wainscot panelling had been overpainted in an off white, which is most certainly the brighter option than keeping the oak wood, and it contains some lovely carved detailing which is still in situ. 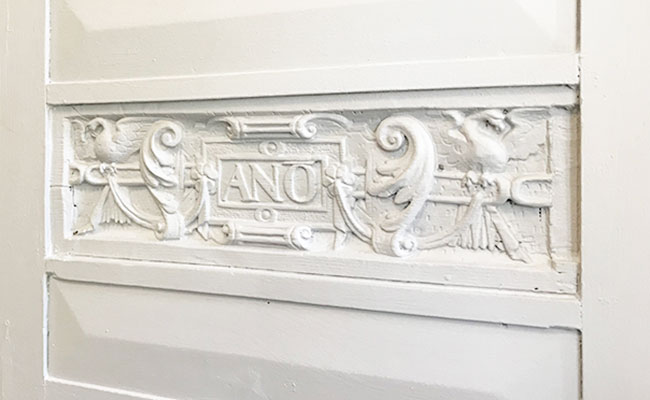 The ceiling features are a blend of new and old and where the summer sun lit the areas directly in front of the windows it was evident there had been leaks in the ceiling as the painted woodchip paper which unfortunately remained was sagging. 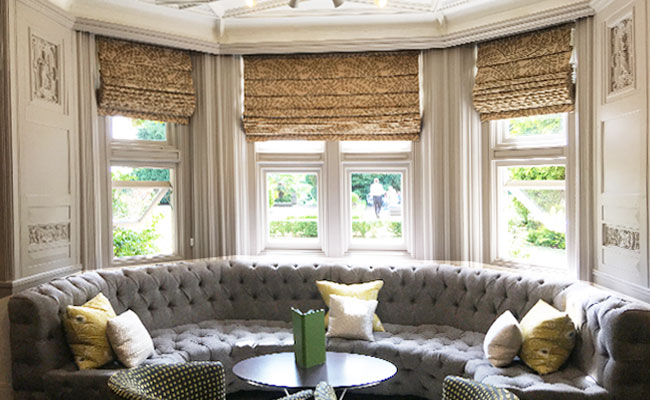 The Hotel's interior architects introduced modern soft seating styles and although the fabrics are inoffensive the bold apple green and patterned fabrics on the loose chairs would probably suit an evening environment with dimmed lighting than during the day.

The raised window seating area has track lighting that may give off some nice effects in the evening but the fitting does not suit the environment and it is smack bang amongst the decorative patterned ceiling.  The mixture of warm white and cool white tones so close together is disappointing to see and the feature wall mounted picture lights are in need of bulbs replacing - it’s those niggly details that stand out to us than the expensive looking polished metal lamps. 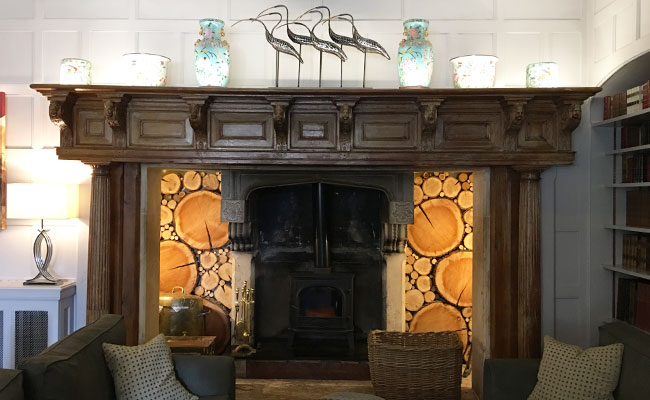 The snug area in front of the original fireplace looks cosier even without a roaring fire in the middle of summer. The double mantle is a different sight than we are used to and with wood burner set back a way has been dressed with coppiced logs and bric-a-brac. The thinly cut logs bonded to the alcoves on either side would benefit from real stacked logs in front, and this may just be the case in winter when the burner is in use.

Above the mantle and around it are art pieces that are completely different styles, colours and we believe it would be worth relocating or swapping some of these out, after all sometimes less is more. 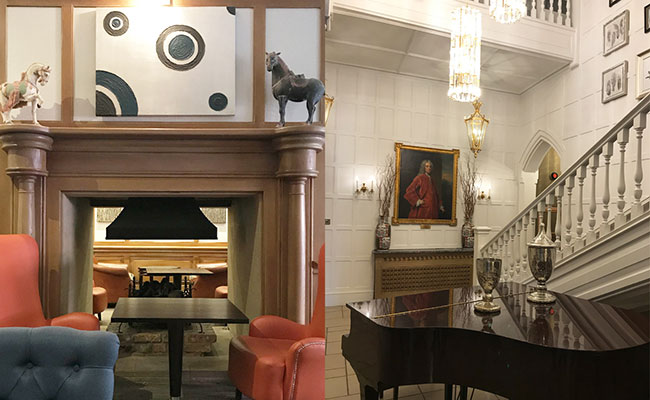 The carpet is silvery grey with a pinstripe texture but as there is quite a lot of it the floor could benefit from some rugs or changes in flooring to break it up and make the room more inviting.

For a 5* hotel champagne bar we have definitely seen better schemes out there but with a fresh pair of eyes and a design review we are confident the Champagne bar can be updated to a bar befitting of a luxury hotel and spa.